I apologize for not posting anything for the past week due to the fact that I was very busy, I promise I will post in the next few days so get ready for that.

Get ready for a really long post, sorry not sorry

As said on my previous post yesterday it was the London Korean Festival, and oh my gosh it was the best. Tiring but the best.  My sister, her best friend and I arrived at trafalgar square 1 hour before the event started hoping we would be one of the early ones. Little did we know that there was a whole crowd of people already waiting so we just sneakily pushed ourselves into the middle of the queue *makes an evil face whilst rubbing her hands together*. We were standing for 1 hour, surrounded by sweaty bodies and the faint sound of kpop music blasting from someone's phone.  It was hot. Really hot. But then it was finally 12 and the gates had opened.  Us 3 had linked arms and made our way through. We didn't even have to walk. The crowd just pushed us towards the gate.  So there were a few zones and I will be now talking about each and every one of them. 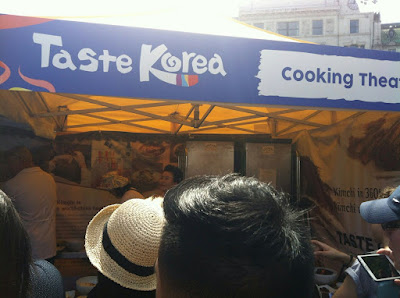 This was on of the places I hardly spent time out due to the giant crowd but this section was full of chefs cooking up a feast for the spectators to try. There was also a variety of kimchi (a side dish in Korea that is normally fermented cabbage but can be other vegetables) however we could not try it because it had alcohol in it, but it sure looked delicious :P

Korean BBQ and other restaurants: 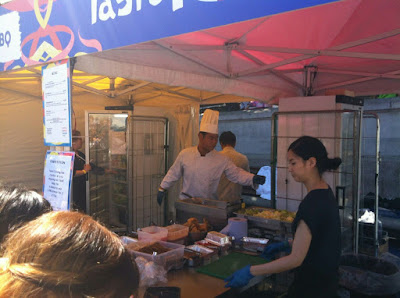 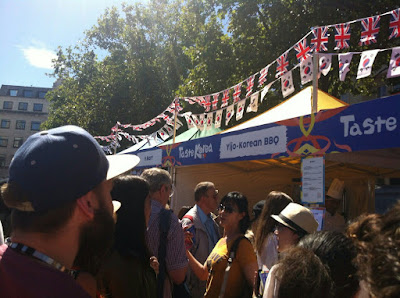 This part was also full of chefs cooking up fried chicken, BBQ meat, ttetobokki,  bibimbap and other Korean dishes that looked very delicious but again we could not try it since the food there was not halal but it seemed like other people loved it! 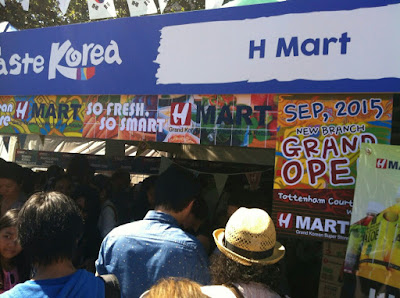 These are the two Korean supermarkets based in the UK mainly New Malden,  so we had to buy snacks from there cos a 2 hour journey to new Malden for snacks sounded a bit weird to us so we made sure we got all the snacks we could from there. Everything there is quite reasonably priced and not expensive at all so we were able to grab quite a few things. 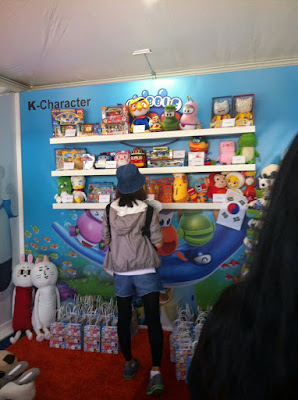 A place where we could watch Korean cartoons whilst sitting on beanbags and this part was mainly aimed for kids but we loved it too.  We could not spend a lot of time there due to the fact that it was really packed but we were still able to have a lot of fun. 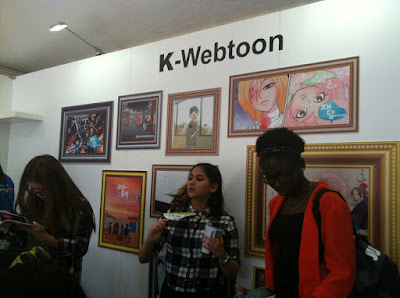 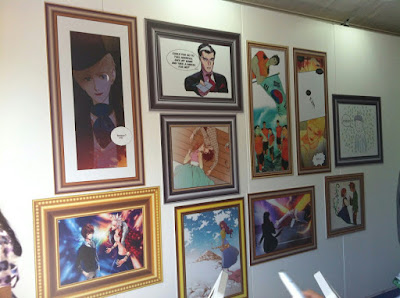 Similar to the character place but aimed for older people and featured Korean webtoons for us to watch. We even got a free fan from the place which was great since it was really hot. 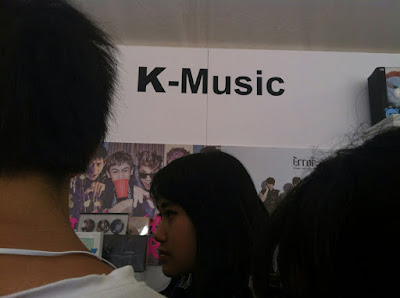 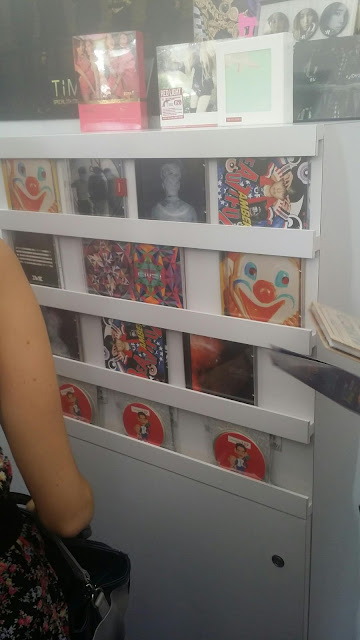 With walls mounted with cds this small area was where you could listen to Korean music. 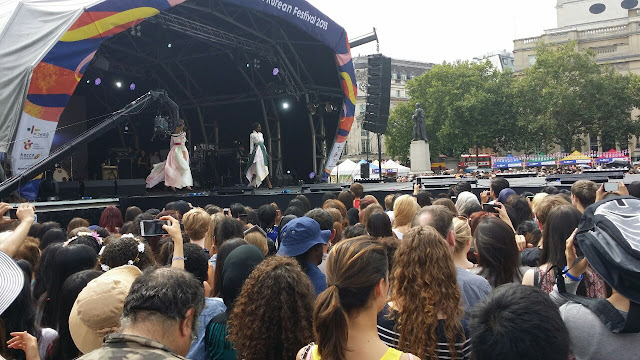 The best part of the festival.  Where there was a hanbok fashion show,  a b boy dance battle, traditional dancing and even a performance from kpop group f (x)! The performances were great but I sadly missed the kpop performance cos my legs were hurting from all that walking (5 hours) and the heat made me feel sick.  But luckily my sister friend stayed and sent me a video of the performance!

Freebies and what I bought:

Everybody loves freebies and we got a lot of them.  We got leaflets,  booklets about Korea,  fans, necklace making kit,  Korean hanbok headband making kit and some glass beads for crafting. I also bought Korean orange juice which is delicious,  Korean biscuits,  Pepero and Korean crisps.

If this does happen next year. I recommend you go. It is an amazing experience and helps you understand the Korean culture more. You would not want to miss it.  Hope you enjoyed this post.

PS: Thanks to Tia Affa (my sisters best friend) for the picture and videos, love you lots xx
Posted by Unknown at 08:03 No comments:

Today I won't be posting anything because I am very busy but I promise you guys I will post a review tomorrow.

Sorry for the inconvinience,

This is just a short post about an upcoming event that is happening in London. I am so excited for this event and I wanted to let you guys know about it to. South Korea is coming to London (not literally) and they will be holding a London Korean Festival in Trafalgar Square so everyone has the chance to experience the Korean culture, fashion, entertainment and more. Entry is FREE and there are no age restrictions. It is a family event and there is even a special performance from Kpop group f(x)! I'll be going, well hopefully with my sister and I will make sure i post about it, so get ready for a loooot of pictures and videos.

Details and links are below:

Hope you guys make the most of this opportunity,

It is Day 5 of Lip tint week and I am back with a lip tint bar review but this time the shade is Red not Orange.
Like the peel off lip tint reviews, I am only going to be commenting on the colour and pigmentation since the packaging and price is the same as the previous review. Hope you enjoy ^-^

Like the orange ombre of the previous lip tint bar, this one has a red ombre so the three colours are red, pink and then a pale nude. After swatching I realised that the pink and pale nude seem to be very similar and there is not really a difference between the two colours after being applied. However the results are still amazing because there is still an ombre with two colours rather than the 3. 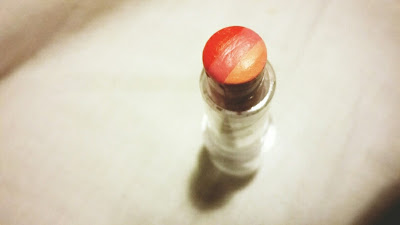 The pigmentation for this tint is amaaaaaazing. I expected it to be very similar to the orange bar but it is not at all. The swatch above was only after one swipe across my wrist and you can see how bold the colours came out. I was shocked because I did not expect the quality to be that good, so if you are interested in a cheap ombre lip, this might be the one :).

I rate this a:


Follow my blog with Bloglovin
Posted by Unknown at 07:13 2 comments: 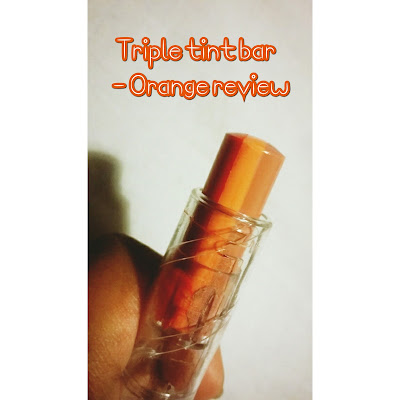 I am back with Day 4 of lip tint week and today I will be reviewing:

If anyone will like to purchase this product the link is below:

This is a dupe of the VDL Triple Shot tint bar and the quality is probably very similar to the real product. The price is only 99p so I bought 3 in Red, Pink and Orange.

The packaging for this product is like any other lipstick tube but clear, you just take the cap off and twist the bottom of the stick to raise the lip tint and I believe that is the most ideal way to package the product as it is really easy to use that way. However sometimes a part of the bottom tends to come off but it only takes a few seconds to put back on so it does not really matter. Overall the packaging is perfect for the product.

The thing I love about this product is that there are three different colours in an ombre style, theres a nude colour, a pale orange and then the dark orange. The recommended way to apply the product is to have the darker colour in the middle of the lips and then the colour goes lighter as it goes outwards, creating the typical Korean lip tint lips. 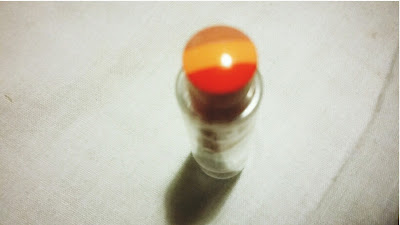 Considering that the tint bar was only 99p is great however if I had to compare it to the peel off lip tint which were also 99p, the peel off ones will win by a mile. However this is a dupe so it is not as good as the real thing so my expectations for the product were not that high, but I will still use this product since it does work.

I rate this product a:

Not the best tint I have used and if I had to compare it to the other one I will have to give it a 2, it is usable but not the best.

Follow my blog with Bloglovin
Posted by Unknown at 10:25 No comments:

Peel off lip tint review No.3! 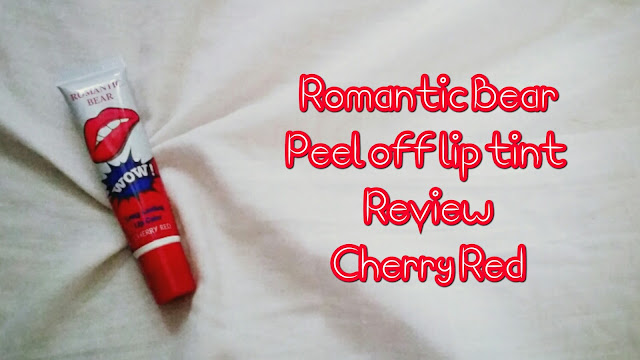 It's day 3 of lip tint week and I am back with another shade of the romantic bear peel off lip tint series and this time the shade is -> Cherry Red! Like said before,  due to the fact that this is a review and the only things different is the shade of the product, I will only be reviewing the colour and pigmentation since I don't want to repeat my views on packaging and price. I have to say out of the three peel off lip tints I have bought,  this shade is my favourite!

Like said before, this shade has to be my favourite out of the three colours I purchased, I am not the type of person who wears a red lippie quite often so I thought I should try this lip tint since it is not a bold colour on the lips but a faint tint. I believe this shade suits all skin tones, so come on girls don't be afraid to try it, I've realised that a red lip goes a long way. So do not be afraid to try it.

This shade comes out the most on the lips and the colour comes out very clearly and is quite bold but I love it, However some may say that the fact the tints last long is good but this particular shade seems to stay on for too long and is quite a hassle to take off, say you accidentally applied the tint somewhere outside of your lips, it is quite a task to correct it as the tint stains straightaway. 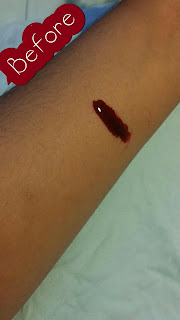 In my opinion I believe this product deserves a:

I would have gave it a 4 but taking in the cons of both the packaging and intenseness of the stain I had to give it a 3.

Get ready for tomorrow since I will be posting a new korean tint, that is very unique compared to your normal tints.

Ara 아라
Follow my blog with Bloglovin
Posted by Unknown at 06:33 No comments: